Well New Years Eve was a blast! Had a barbie with a few friends around. I’ve gotten addicted to fluffy ducks, and I swear the drink is as good as the name is! 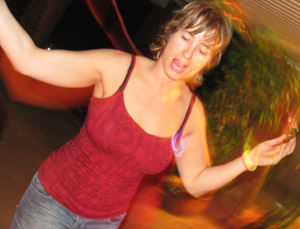 All through a straw ………mmmmm.

We had my friends boyfriend on the scene who happens to tinker in photography. He got hold of my camera and took some spooky pics. I feel tripped out just looking at them. 😛
I think I look………..um………..well, drunk 😛 lol. 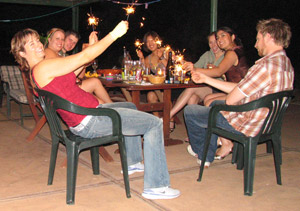 Then we saw in the New Year with sparklers, damn SAFM for not counting us down into the New Year, but who cares, we did the sparklers anyway. 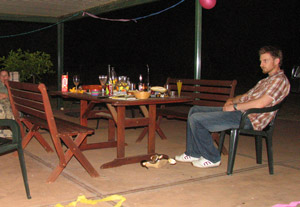 This next pic I thought look rather cute. I dunno where it came from, but Adam looked so lonely and it’s hilarious when you view it after the previous pic 😛

ok ok, well it was hilarious about 2am this morning when we were viewing the piccies on my camera……….after how many fluffy ducks?

What we were doing while Adam was sitting there so lonely? I have NO idea. Do I care? Not really 😀 We were probably drinking or something. Where’s my fluffy duck?

Surprisingly I didn’t have the slightest traces of a hangover, I think I burnt all the excess alcohol off! Mind you, I slept till 11.30am, and then after Sofie and Denise left I slept again for a few more hours, for no other reason than I was too lazy to stay awake.

I wont even start on the body jam we were trying to do. Note to self: Must invite a body jam instructor next party.

I love having barbies at my house. I swore I was going to continue doing these on a regular basis after my my birthday earlier this year (last year?), but it just never happened. Maybe I should make the most of it while we’ve got good weather!