Well I have to say I didn’t do a whole lot this time around. I learnt my lesson after last time and that it’s just too hard to teach 5 classes on the weekend (Sat – BP/BA/BB, Sun – BP/BB) and then participate in the workshop aswell. Not to mention I’ve still been very tired. I’m getting heaps more sleep at the moment which is good, but I just felt flat on the weekend.

Sofie ended up twisting my arm and getting me to do attack on the Saturday, but my back, butt and legs were killing me (and not from exercise soreness, it was pain pain that needed a massage……getting one tomorrow YAY) so I didn’t put a whole lot of effort in. I went to the loo during the upperbody conditioning and when I came back there was no room on the floor so I conveniently missed that track 😛

To summarise, the warmup for BA56 really seemed to suck……..right from the start. I’m rarely ever this negative, but I just don’t think anything is going to change with this track. I just doesn’t fit attack. Maybe someone out there may like it? However as soon as track 2 kicked in, the energy also kicked in. It really picked up from this point!

I missed combat, cuz I didn’t get to the workshop in time following my classes. Stayed for the education though, but it didn’t make much sense cuz I hadn’t done the class. Pretty cool that the Evasive Side Kick is back though!

I was starting to stagger by the time balance was on, and I didn’t even have the energy to watch it. Went and had a late lunch with Sofie.

The second day of the workshop was today and again I had to teach beforehand, but I made the effort to get there in time for Body Vive. I really wanted to see it, but I nearly wasn’t going to go. Georgia begged and grovelled for me to come to the workshop with them (despite me being grumpy and functionally unsociable). So I went……and I’m glad I did do Vive, cuz it’s really great to see what it’s about. Thank gawd it’s a relatively easy class in the sense of how much pain I was in. I’m almost interested in training in it, but not keen to spend more money right now. Nor am I keen to learn more chorrey, but it seems a great class to be able to teach without battering the body too much. I had a lot of fun being stupid with the balls and trying to steal Georgia’s ball and attempting to skip with the (very short) resistance band thingys we had 😆 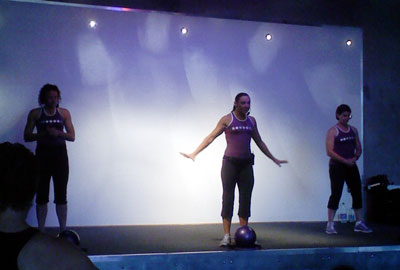 After this, again at this point I wanted to go home and go into hybernation, but my friends convinced me to stay. I proceeded to actually FALL ASLEEP during Jam while the music was pumping and everyone was stomping. I woke up at the end when everyone clapped at the end of the class. I guess I was tired……..lol. I ended up waking up feeling grumpy enough to fill in workshop feedback (and hey, you go into a draw to win something) so that I could tell them how crap it is that prices keep going up, they keep cutting costs for Adelaide so that they can send IMT’s and Choreographers to all the other states except us……..grrr. We pay the same price as the other states and we only get local “talent”.

We ended up going out for tea afterwards which is becoming a cool tradition of ours. I still felt pretty unsociable and Georgia noted how I was a bit quiet……….but hey, sometimes I just NEED downtime and that was one of those times. That’s what friends are for aren’t they? 😉