For the balance filming we had Jackie, Dr Dave, Anita and Cory presenting. I’d seen a couple of the BB classes and I felt that Cory improved considerably from the first class I did with him to the filming. It just all came together in the filming. The other presenters did seem a bit more confident though, which is to be expected considering they’ve already done so many filmings.

It was really relaxing and great to stretch out the body after the intensity of the previous two filmings. It was great, cuz I had exercised my muscles were extra stretchy and warm.

We pretty much went straight through without any errors, although Anita had to restart the intro a couple of times. It was quite an amusing laugh when as per her script she asked if there was anybody new to balance and there weren’t any 😆 So we had to restart that and ask the question again, WITH new people in the class…..or at least people putting their hand up that they were new. 😆

I did the butt grabbing thing again during the hip openers, so now that is gonna go out to the world on the DVD! I was a little bit nervous about it when the hip openers came up and at the time I wasn’t so sure I wanted to do it anymore. Too late now, haha.

Overall this release is a nice release. I need to hear the music more to really tell how it sits with me. As mentioned before it seems there’s a slightly new format, but I cannot tell exactly what it is except that there seems to be an extra track between balance and hip openers. The moves in the track itself seem to be a cross between hips and balance moves, so maybe it’s a transition track?

Dave’s voice was very soothing in the meditation. I generally tune out and do not hear a word what is said during meditation and this time was no exception. However it was great hearing the smooth tone of his voice. I could certainly handle that more often!

Most of all, this time I really liked the clothes they’re wearing this time! In some of the releases in the past some of the clothes they’ve worn have been fashion disasters. I particularly like Anita’s pink top, I want one of those! It’s got the maori symbol thingy on it aswell that is on most of the new NZ clothing these days, but you can’t see that from the pic. 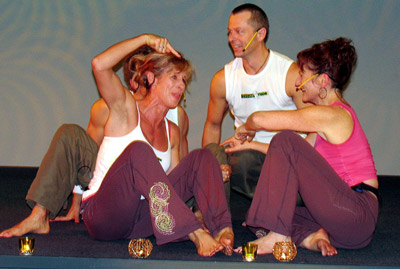