WOW, this has to almost be the highlight of my trip. I mean, don’t get me wrong, the attack filming went off and gave me a huge adrenalin buzz. The pump filming was awesome, balance (which I’ll write about next) was exquisite…….however BODYCOMBAT 33 filming was better than an orgasm!!!

The endorphins are still kicking around. I’m so glad I got to do a few practise classes prior to the filming because this release seems a bit harder to keep up with without making mistakes. Want as little mistakes as possible when the camera’s are rolling!!! 😛

I even managed to slot in at the front row. Rach gave me a couple of shoutouts during the class which was pretty cool, thanks Rach. 😛 I couldn’t understand initially why Linda slipped behind PJ into the second row, but I think it’s cuz she was having some injury troubles. She seemed in a lot of pain, but nothing was gonna stop her doing the combat filming! On one side of me I had a guy dressed up as a samurai, lol. I’ll upload photos to the gallery on groupfitness.org later once I get home.

Now that I’ve done BC33 for the 4th time I actually remember some of the music, I have it playing around in my head. I can’t help singing “WOAH, WOAH, WOAH” and “IT’S GOD DAMN KICK TEST!” I think I’ve maybe come to terms with the Muay Thai. Still don’t LOVE it, but we can get along ok 😆 Hopefully my street brawl downward punches looked better during the filming, thanks to PJ pointing out that I wasn’t retracting my punch. I didn’t realise I was doing this while I was still learning the chorrey, and it’s the first time we’ve had a different move following the SBDP. I’m kinda a bit clumsy until I know the chorrey!

I can now officially say that I think this track 6 is the best ever! Maybe the whole release is the best ever for me, I dunno I’ll have to make that final judgement when we get it in 3+ months! 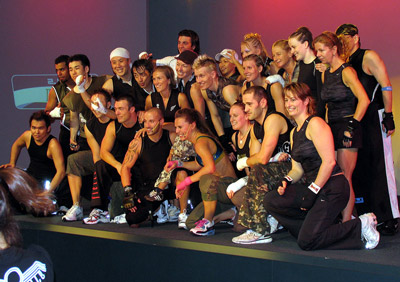