I’ve been hanging out for this worshop ever since the filmings back in April/May. I missed out on balance in the morning since I couldn’t get a fill in for my pump class, however I managed to make it for Combat and Attack.

I like the new location they chose for the Workshop at the Adelaide Convention Centre. Although the room was WAY too small and I think they should have seriously considered hiring a bigger room. But personally I don’t think it was any worse in size than the previous location. However the facilities were way better. At least we had room to wait outside (without spilling into the carpark) and there was a chance to buy nibbles if necessary. AND THE CLOTHING IS BACK!!!! yay! Except I didn’t buy anything cuz not only have I got too many clothes anyway, but also I’m just not into the new logo just yet.

I did Attack first and Dean, Chris and Tanya did an amazing job. The music and the chorrey came flooding back to me as a long distant memory. I forgot how much I enjoyed this release! The only thing I thought was that during the education they confused the issue more by trying to demo the new move in track 9. They made it look HARDER than what it actually was. The setup during the track actually sets the entire move up really well and doesn’t need a lot of introduction, but yet when they talked about it they made it seem like a scarily impossible move. I spoke to at least 1 other instructor who felt the same way.

Then for combat……ohhhh, this one is my baby. BODYCOMBAT THIRTY THREE!

Memories of Studio 1 that I’ll never forget.Â This release seriously rocks. I can see that some instructors may have difficulties with the timing on some tracks, but I’m glad I’ve had a heads up and an extra practise doing it in Auckland. I did notice the presenters inÂ combat just hitched up slightly on the timingÂ during track 6. They did it ok, and it wouldn’t be noticable to anyone else it was that subtle, but after doing it several times with Dan and Rach it just wasn’t as fluid. I’m looking forward to teaching this!

I didn’t stay for pump. I was pretty smashed afterÂ teaching pump already in the morning.

Best of all, Alex got to experience an Adelaide workshop!!!! Wooohooo!

Later a group of us went out for the usual dinner afterwards (lunch?). Georgia, Sofie, Jonno (nice to meet you!) and of course Alex and I stopped by at Buon………oh whatever the name is, it does Italian food alright? 😆

After dinner Georgia and Jonno had to get going, so Sofie, Alexander and I wandered down Rundle Mall and showed Alex the balls. Luckily they’re back now, since it wasn’t that long ago that they were taken away to be cleaned. Look at the shiny new balls…. 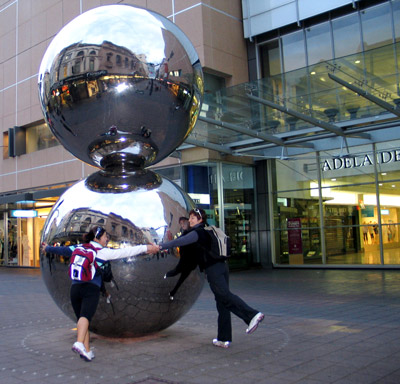