I took Alexander up to my parents farm for the day today to see a bit of “Australia”, a bit more of a taste of our country. My parents live at Murray Bridge and run a farm up there. We didn’t get time to go around the 3000 acres that dad runs, but we did get to see the new property my parents are buying. Since dad has been unwell they are selling the farm, selling the house (2 seperate properties) and hoping to buy another property that has only 300 acres. A bit more managable for dad.

I was looking forward to having a spa at mum’s, but it turns out the spa was out of action.

Alex……no, I’m NOT getting in the pool……despite the nice days we’ve been having it’s still WINTER ok? 😆 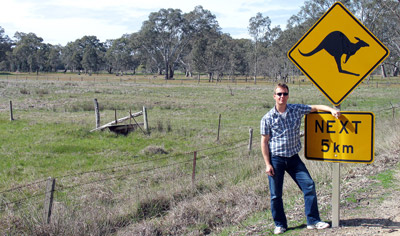 The drive home ended up being a bit more eventful than the way up there. The trip includes driving through the Adelaide Hills and Alex has been hanging out to drive on our country roads since the day he got here. I wasn’t keen on letting him drive my car, since not only am I unsure about how international licences work, but also I don’t know what extent of car insurance I have, not to mention the fact that he’s used to driving on the other side of the road! But on the way home tonight I relented and allowed him to drive for a little while.

Unbelievable, I don’t think I’ve ever been more scared than in any other situation. I don’t tend to go on show rides and stuff, cuz I get motion sickness even in an elevator……but this was scarier than even the rides I have been on. I think, by the end of the trip Alex had more fun with me freaking out than he did driving……….I’m not sure what that says 😯

To be honest, he didn’t drive particularly badly or whatever, but he did drive too close to trees and cars on my side of the car a few times…….until I informed him that that was freaking me out. I tend to be claustrophobic when I’m driving so I don’t like it when there’s 2 trucks either side of me. Alex left plenty of space for himself, but left me watching just how close we were getting to the trees and cars! His theory made sense, trees and parked cars don’t move……..but on coming traffic does.

Logic aside, it’s ME that’ll die if we hit one of those non-moving things!!!!!

When I took over driving again would you believe that I actually had to pull over and redeem myself……….much to Alex’s amusement. 😯