Today we met up again with Ben and his family and drove the hour and a half trip to Madurodam, which is a tourist part with minature replica’s of The Netherlands. During the drive we stopped at McDonalds first on the way, which pretty closely resembled McDonalds in Australia. The food though, like most other food here, tasted of better quality and I think I could probably end up eating it more if I lived here. So thankfully it tastes like crap in Australia so I can’t be tempted! 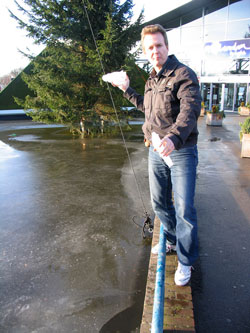 Outside Madurodam there was a pond thingy with water in it, which was almost frozen aswell like half the canals and waterways here. I’m still fascinated by the ice, since at home, at most we might be lucky to get a thin film of ice overnight on the horse water troughs. But we never ever get ice remaining during the day, let alone such large volumes of ice! So Alex, for my benefit, put his foot through the ice and picked up a big chunk of it for me. 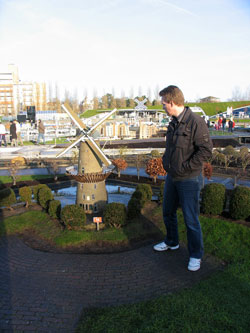 It was interesting looking at all the replica’s as we wandered around. There were little amusement things where you could put a coin in and something would happen. One of them was a rollercoaster which unfortunately got stuck at the top, but then Ineke gave it a little shove and got it going again. I also got a really cute set of minature clogs delivered to me by one of the minature factories though which was so cute!

We tried to look for Apeldoorn amongst the replicas, but it seems there’s nothing important enough in Apeldoorn to add to it apparently? 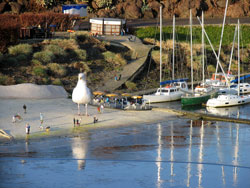 We all found the large seagull pretty amusing, because not only was the seagull a bit larger than usual, but next to the minature buildings and canals it looked funny. I took a couple of amusing photos of it and he seemed to follow us around quite a lot. I’m convinced that this seagull is an attention seeker and he enjoyed posing for my larger than life photos. Or maybe he just wanted some food? 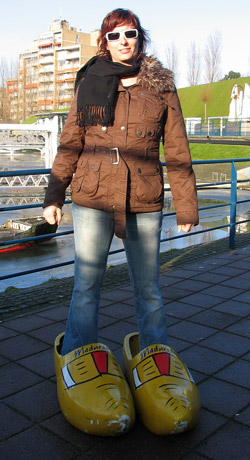 After Madurodam we headed to the beach at Scheveningen where I can now say I’ve touched the sea in the Northern Hemisphere. I must say though that the water is too cold for touching it be a sane action, but I did it anyway! I’ve been told that apparently it’s a New Years Day tradition to strip and run into the sea. You’ve seriously got to be kidding me! Alex keeps threatening to take me to do it, but not on your life! I think going into that cold water would literally kill me, lol.

We stopped to warm up at a beach side restaurant that offered pretty terrible service, but it was warm. Because we weren’t ordering dinner they would only let us sit in a particular section and wouldn’t allow us to move the tables together so that we could sit together. But it was nice to have a hot chocolate and thaw out and I tried my first taste of bitterbollen. These balls have ragout in it, which although I didn’t recognise the name I do recognise the taste from a recipe that my aunts always used to make on Christmas Eve (for those who don’t know my family is dutch). I happen to LOVE ragout and I’d forgotten how much I’ve missed it!

Dinner was later a restaurant called Drie Konijnen which stands for Three Rabbits. Again my appetite was fairly small as I seem to only be able to eat little and often. I get hungry often, but can only eat small amounts. However Ben and Alex made up for it with their hearty appetites where they consumed an amazing 4 serves of spare ribs! The unique thing about this restaurant is that when you order spare ribs, you can get unlimited return serves. I was stunned as I watched them get serve after serve. Apparently the record was 8 plates, but I think we ran out of time rather than them getting too full. Then to top it off Alex ate some of my chicken that I couldn’t finish off!