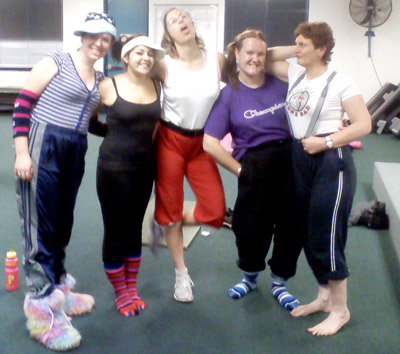 On the night of Monday 21 May, 5 detainee’s of a mental institution escaped and entered the gym at Zest Modbury. One, who is a BODYBALANCE instructor, took a class while the other 4 stood gleefully at the front whilst the remainder of the class were held hostage and participated in fear…..or entertainment…..one of the two!

Throughout the class none of the nerds threatened any of the particpants, and at the conclusion of the class they were captured and arrested by police, to the relief of all members at Modbury Zest. All evidence of the nerds has now been removed from the scene and is being washed, dried and folded into boxes to take to the salvation army. Any photographic evidence of the event has been confiscated by police and after being analysed will then be destroyed as per military procedures.

Any witnesses of the event are urged to find their own psychiatrists for counselling, since we have our hands full already with all staff now requiring medication.

Hopefully peace can return soon to the peaceful town of Modbury.