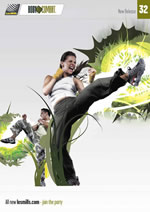 I’ve surprised myself quite a lot and discovered that I’m actually liking release 32 a bit more than I thought I would! I taught it in my class for the first time tonight, but not the entire class. I got Brandon (a fairly new instructor that hasn’t taught on his own yet) to help me out, since I’ve been so under the pump lately.

He did quite an amazing job. Certainly did a great job of track 4, which isn’t an easy track to teach when you’re new. I SMS’ed him this afternoon and said “wear black”, cuz while I was getting my hair cut I decided on a spontaneous Matrix style theme. I flattened my hair, got the black sunnies and wore a long trenchcoat jacket (not for long though, lol) kinda in Trinity style theme. Forgot to get piccies so I’ll have to put Brandon up to it again and we’ll get photos next time 😉

The class went ok though. I didn’t know my chorrey as well as I’d have liked. I was supposed to have an hour prior to my class to go over my chorrey again, but cuz I had a trainingÂ session with my friend that ran a bit longer, I ended up with only about 15 mins to go over chorrey…….not enough 🙁

It was freaky though a new member had a free pass to try out the gym and would you believe she’s done my class before at another gym years ago. She recognised me and after she said I did remember her………and would you believe it I actually remembered her name!!! Can’t believe I managed to recall that……my memory surprises me sometimes!