wow I had the most amazing experience getting a “makeover” yesterday. Obviously I didn’t quite know what I was in for being a hair model, or I might have been a bit more scared, but I’m glad I did it! Here I thought I was just going to get a cut and colour, thought it’d be kinda similar to what I had, just a bit different…..but little did I know that I was looking at a complete make over.

There was more I didn’t know though. It was funny, because all of a sudden I was in the workplace of one of the gym members. Normally it’s the other way around, I’m teaching pump on stage and I’m in control…..and all of a sudden I’m at the mercy of a guy who I knew was a hair dresser but I hadn’t managed to learn his name yet (ie. that means I couldn’t remember it cuz it was a hard one, but I’ll never forget it now!).

So while we were being debriefed and prepped for the seminar I began to realise that I wasn’t going to have as much say about my hair cut as I thought I was. But that was ok, because I’d already decided that I was going to leave it in his hands, and I figured he must be a kind of decent hair dresser if he’s doing a seminar. So I was feeling slightly nervous but excited at the same time. He discussed with the hair colourist what they were going to do with my colour and they threw around some techy words and said I needed some colour correction (which I later learnt was a nice way of saying I had grey hairs). They were discussing using the colours “violet” and ” copper” and he then kindly turned to me and explained “that’s purple and orange Mel”………….ahhhh right, thanks for that…..lol.

About 15 minutes before it’s all due to start, he says to me with a smile on his face “now Mel, when we go in there once we start you cannot speak unless I ask you a question first”……..I looked at him and laughed and said “oh my god are you KIDDING me????” I would have to say that that singlehandly was the hardest thing about the entire process…..lol 😆

Once the seminar started there were 10 hair dressers watching who were all apparently paying a fair bit of money to watch me get my hair cut. But then I started picking up little bits of information as we went along. I started to notice that he wasn’t just any ordinary hair dresser, he wasn’t even just a good hair dresser……..I heard stories about the hair styles he’d done for models in TV commercials, his seminars all over Australia and overseas. By the end of it I also found out that he’d won awards and stuff. I dunno all the hair dressing lingo, but it sounded pretty damn impressive to me!

Monday morning pump at 6am is just never going to be the same now………I’m actually going to have to do something with my hair when I stagger out of bed in the morning now! I’ve realised that in the future I’m going to have to pay a whole lot more for my hair cuts than I was previously used to! 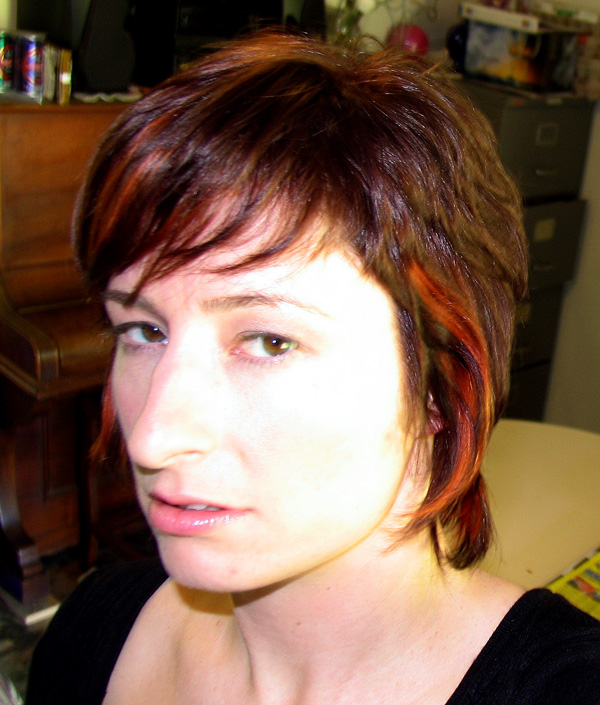