Instead of the usual Tuesday night Primo’s, we all went to Phil & Jo’s for a BBQ. Congrats to Phil & Jo for getting me to actually like a chop, but then I think I ended up eating too much to enjoy the chocolate cake……….mmmmm.

Don’t think that stopped Alexander though.

Thanks to Alexander’s intense relationship with the chocolate cake we got to take some home with us, which then went down very well at breakfast in the morning……..which I managed to claim a few crumbs before Alex devoured it all.

Apart from the eventful chocolate cake, the other highlights were the viewing of the current stash of photos we have and also the romp on the floor with Natty and I, which someone somehow took a picture of 😯

As for the floor workout…….well….. 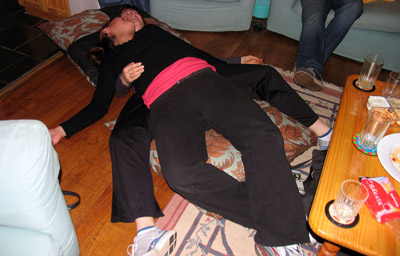