Today I finally got the amazing opportunity to meet some long time forum friends. Vicki (Red) and Robert (Sigma) arrived first and I’ve known them for 4 or 5 years or so. Especially Robert who I’ve known the longest from the old forums before I started btstalk.com and before I was an instructor. Meeting them was like having known them the whole time. There were no surprises, they were everything I expected in real life.

I have to thank Vicki especially for making the trip here from the UK. I really appreciate her going out of her way and booking a flight to come see me. I hope it isn’t the last time and hopefully I’ll get to meet her family one day. Alex and I just need to earn lots of money some how so we can afford a trip to the UK in the future 😉

Rien (Voidbrain) and Janne arrived next and I’m so glad they came along, even though I haven’t known them that well from the forum. We spent the afternoon chatting and catching up, and I felt entirely comfortable with everyone, I felt like I was amongst friends.

In the afternoon Janne got out her blood pressure monitor and we all had fun checking our blood pressure. Mine was the lowest, although it was a bit higher than usual for me, since I’ve been having fairly low blood pressure lately (which is normal in pregnancy). Janne is a midwife, so she also brought along her Doppler machine which is a device which enables you to listen to the baby’s heartbeat. I have been able to hear the baby’s heartbeat with the obstetrician but it was awesome to be able to share this with Alex.

We captured this moment with the video function on my digital camera.

We decided to go for a walk to the nearest shops to introduce Vicki to the experience of Oliebollen and Alex promised us that it was a 17 min walk. It seemed like it took rather longer, so after the warm Oliebollen experience, Vicki and I timed the walk on the way back which amounted to a whole total of 30 mins instead!!! Not sure if this is partially due to the fact that (as Alex informed me later) Vicki and I led the group the wrong way on the return walk.  😆  Vicki described the Oliebollen experience as tasting rather like donuts, and I guess she’s pretty close with that description (except without the icing and lighter and fluffier for those familiar with aussie donuts).

It was hilarious with Vicki and I trying to decipher the menu. I have managed to figure out that “kip” = “chicken”, but it was hard really figuring out what everything was. We were looking at getting a banquet for all of us and while Vicki and I were struggling with one of the banquet menus, the waitress helped us out by suddenly handing us an English version of the menu! 😆 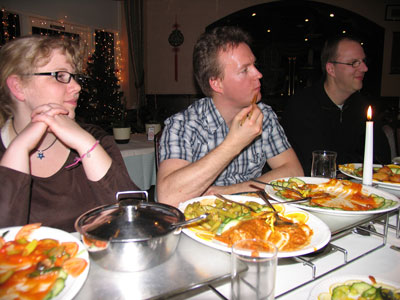 After tea (DINNER!) Janne and Rien left to make the trip home, while the rest of us went back to Alex’s apartment. I have to thank Robert for giving me the most wonderful neck and back massage. I have heard rumours that he was good and I can now confirm it’s true! Alex was supposed to be picking up tips while I got the massage, but I think he got distracted talking with Vicki. I think Alex could be really good at massages if we didn’t get distracted all the time, lol.

We were going to muck around and do a balance class together, but I got too tired to teach a balance class. Or maybe I was just too relaxed after my massage.